The nation’s electric grid is a highly interconnected system: impacts to the grid in one location can effect communities far away. According to the latest National Climate Assessment, climate-related impacts increase risks for critical, interconnected systems, many of which span regional and national boundaries. Investing in smaller grid structures powered by clean energy sources – such as microgrids powered by combined heat and power (CHP) systems – can help to mitigate these risks. 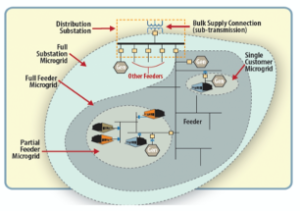 Office of Electricity, U.S. DOE. “The Role of Microgrids in Helping to Advance the Nation’s Energy System.”

The U.S. Department of Energy (DOE) describes microgrids as “localized grids that can disconnect from the traditional grid to operate autonomously.” CHP systems can provide reliable power to a local community as part of a microgrid, allowing several buildings or facilities to keep the lights on during a grid outage. Microgrids are used by universities, military installations, municipalities, and public institutions, helping to maintain the reliability of their electric and thermal energy supply and to improve their resiliency against extreme weather and power outages. In some locations, a number of critical facilities such as hospitals, fire and police stations, emergency shelters, and gas stations can be connected and configured to operate in isolation from the larger utility grid, even during extended outages.

Microgrids strengthen grid resilience and mitigate grid disturbances for these users by localizing power generation close to critical services and providing faster system response and recovery. As of 2016, CHP was the primary generation technology for existing microgrids and is expected to be implemented in future microgrid projects (see chart below). 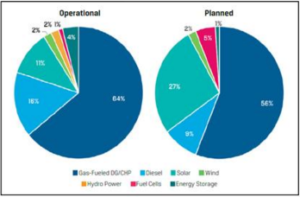 CHP systems are more reliable than conventional backup generators because they supply continuous thermal and electric energy and they frequently utilize natural gas infrastructure, rather than relying on deliverable fuels. This makes CHP-fueled microgrids a cost-effective, resilient solution to support critical infrastructure such as hospitals, colleges and universities, wastewater treatment plants, and airports. Including CHP in infrastructure planning can help facilities improve resiliency and increase reliability, while also reducing energy costs and greenhouse gas (GHG) and other emissions.

CHP-powered microgrids are becoming more prevalent in community resilience planning with multiple stakeholders. The Nassau Energy Corporation CHP Facility in Garden City, New York illustrates the resilience benefits of CHP-powered microgrids, especially in the context of severe weather events. In addition to selling power to the Long Island Power Authority (LIPA), the 57-megawatt (MW) system also provides steam and chilled water services to the Nassau University Medical Center (NUMC), most of Nassau Community College’s campus, a civic center, a hotel, and a museum complex. During Superstorm Sandy in 2012, the CHP system functioned as a district microgrid, supplying continuous electricity to LIPA and thermal energy to all of its end-use customers without any operational issues throughout the entire storm.

These CHP systems not only provide the benefit of essential energy services during catastrophic weather and emergencies, but also create cost savings, distribution capacity, power quality benefits, and environmental benefits for the entire community. For example, the City of Tucson, Arizona utilizes a 1.6 MW CHP unit to provide base electric and thermal loads year-round for the city’s municipal buildings, police station, fire department, convention center, music hall, and a nearby church. The district energy plant saw a major decrease in emissions of carbon dioxide (CO2), nitrogen oxides (NOX), and carbon monoxide (CO) because they switched from coal to natural gas and utilized a high efficiency CHP system. Economically, the microgrid structure enabled a smaller collective footprint which promoted greater efficiency, load diversity, and affordable reliability. 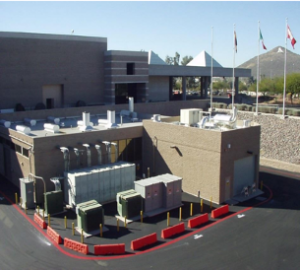 In addition to municipal applications, CHP-powered microgrids are an important component of energy reliability in a variety of sectors. For example, in 2017 the National Aeronautics and Space Administration (NASA) Lyndon B. Johnson Space Center (JSC) in Houston, Texas built a 11.9 MW CHP system. Operating alongside the utility, the JSC’s CHP unit provides approximately 70 percent of the facility’s base electric load, 100 percent of the steam load, and 40 to 60 percent of the peak chilled water load. This is especially important if there are power disruptions from the utility because the JSC’s CHP system can operate as a microgrid and provide the necessary resources for critical mission operations like the Orion program and the International Space Station mission control. In addition to the system’s reliability, it is expected to save the JSC nearly $141 million over the coming 22 years.

In addition to its ability to anchor microgrid systems, CHP serves as an enabling technology to further integrate renewable energy into the fuel mix at the community level. North of the Arctic Circle in Fort Yukon, Alaska, the shared common buildings and water system used to rely on expensive fuel oil that was barged in. However, in 2017, the Council of Athabascan Tribal Government, the Gwitchyaa Zhee Gwichin Tribal Government, and the Gwitchyaa Zhee Corporation jointly developed a 2,540 kW CHP community energy system which can more efficiently provide electric and thermal energy, saving 66,000 gallons per year of diesel fuel. The community also installed a new wood chip-fired boiler that provides renewable energy benefits, as well as stable jobs, rural economic development, wildfire mitigation, and habitat enhancement.

To learn more about CHP and its role as a climate solution, join the CHP Alliance for our virtual summit, The Role of CHP in a Low-Carbon Future, on September 14-16.

This post is the third in a series focused on CHP’s effectiveness as a climate solution, to learn more, read the first post about state legislation recognizing environmental attributes, and the second comparing CHP and central gas plants. The final post in the series regarding CHP’s ability to work with renewable fuels will be released in the coming weeks.