The threat of climate change recently became one of the top national priorities for a majority of U.S. citizens. Combined heat and power (CHP) is a vital component of any comprehensive climate change plan, providing solutions to some of the most intransient challenges that the country will face in efforts to mitigate and adapt to the changing climate. While CHP has the potential to reduce carbon and other greenhouse gas emissions, a lack of widespread recognition of its environmental benefits prevents wider adoption. Actions at the state level that support CHP can help to bridge this deployment gap.

Since a CHP system provides electricity and thermal energy together, it can typically operate with an overall efficiency of 65-85 percent, which is almost 30 percent higher than the efficiency of traditional generation. This higher efficiency uses less fuel, reducing the cost of generation as well as all types of emissions including greenhouse gases, criteria pollutants, and hazardous air pollutants (see diagram below). 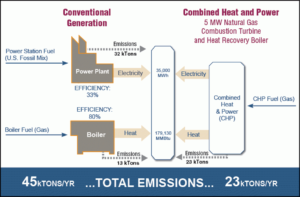 States interested in reducing their greenhouse gas emissions have deliberated and passed energy efficiency and clean energy legislation. In 2020, lawmakers in Virginia and Maryland considered bills that promote a cleaner energy economy and will help each state meet their specific emissions reduction goals. Though the two states treated CHP differently, each state’s legislation included CHP as a supported technology and demonstrated how CHP’s environmental benefits can cater to a state’s policy interests.

Prior to the most recent legislative session, Virginia did not have any formal legislation on statewide emission reduction goals. However, Gov. Ralph Northam signed an executive order in September 2019 for a plan of action to produce 30 percent of the state’s electricity from renewable energy by 2030, and 100 percent from carbon-free sources by 2050. Building on this order, the Virginia General Assembly passed the Virginia Clean Economy Act, requiring new measures to promote energy efficiency, setting a schedule for closing old fossil fuel power plants, and requiring electricity to come from 100 percent carbon-free sources.

In 2016, the Maryland legislature passed the Greenhouse Gas Emissions Reduction Act to decrease the state’s emissions 40 percent from 2006 levels by 2030. Earlier this year, Maryland Governor Larry Hogan introduced the Clean and Renewable Energy Standard (CARES) bill in each of the state’s chambers. This bill would have adjusted Maryland’s portfolio standards for electricity sales to include clean and renewable energy, including CHP generation technologies. In particular, CHP systems with at least 60 percent efficiency would receive increasing portions of a clean energy resource credit. The bill acknowledged the carbon reduction benefits of CHP and its potential to help Maryland achieve its greenhouse gas emissions reduction goals over the coming decades. Though the bill was heard in the House Economic Matters Committee and the Senate Finance Committee, it did not receive a vote in either committee before the Maryland legislature ended its session early.

These two examples illustrate how CHP can be included in a state’s energy efficiency resource program or clean energy portfolio standard, depending on the goals of a state. CHP fits into either model because efficiently using less fuel to provide the same energy services means that CHP systems reduce all types of emissions.

CHP’s efficiency benefits are important because these systems can continue to make use of natural gas infrastructure and support the resilience of critical infrastructure while still reducing emissions. Including CHP in infrastructure planning can help states reduce energy costs, improve resiliency, increase reliability, and reduce greenhouse gas (GHG) and other emissions. Moreover, CHP systems also have the versatility to reduce emissions even further in the future by utilizing renewable fuels as they are developed, including biomass, biogas, renewable natural gas (RNG), and renewable hydrogen. CHP’s compatibility with these cleaner alternatives further demonstrates its value as a long-term, clean energy investment.

The CHP industry also employs numerous workers and has support from both sides of the aisle. For example, the Maryland CARES bill was proposed by Gov. Hogan (R), and had Democrat primary sponsors and Republican cosponsors in both the House and Senate. This bipartisan support in Maryland for CHP technology shows its potential as an effective climate solution for electricity and thermal energy generation.

States can support CHP system deployment to reduce their greenhouse gas emissions. CHP can fit into a state’s energy efficiency or clean energy policies, depending on the policy goals of the state. The recent legislation in both Virginia and Maryland can provide a guide to other states looking to recognize CHP’s environmental benefits. To learn more about CHP and its role as a climate solution, join the CHP Alliance for our virtual summit, The Role of CHP in a Low-Carbon Future, on September 14-16.

This post is the first in a series focused on CHP’s effectiveness as a climate solution. Future posts regarding CHP as a lower carbon and more reliable strategy than central gas plants, CHP’s role as the backbone of microgrids, and CHP’s ability to work with renewable fuels will be released in the coming weeks.