Amidst the growing threat of climate change, industrial energy users across the U.S. are looking for ways to reduce greenhouse gas (GHG) emissions while maintaining energy reliability and creating economic growth. These users face additional challenges reducing emissions because they frequently have significant thermal energy demand in addition to their electricity needs. Combined heat and power (CHP) systems offer a way for the commercial and industrial sectors to reduce their emissions while saving money, improving the resiliency of their operations, and realizing economic growth. Even compared to the most-efficient fossil fuel power plants using natural gas combined cycle (NGCC) systems, CHP is still more cost-effective, reliable, and environmentally friendly.

The average efficiency of fossil-fueled power plants in the U.S. is 33 percent. This means that two-thirds of the energy used to produce electricity at most U.S. plants is wasted. When this electricity generation is combined with an on-site boiler for thermal energy needs, efficiency improves, but only to 50 percent. While a new NGCC unit can operate at between 50-60 percent efficiency because the waste heat from its gas turbine is used to generate steam and turn a second turbine for additional electricity, a more efficient option is available.

CHP is an even more efficient technology, as systems typically reach efficiencies between 65-85 percent, with some approaching 90 percent. CHP systems do this by recovering the waste heat by-product of electricity generation as useful thermal energy for heating and cooling. Currently, CHP comprises about 8 percent of the electric generating capacity in the U.S., but the U.S. EPA estimates there is more than 240 GW of technical potential at over 291,000 sites across the country.

Bright Hub Engineering. “The Efficiency of Power Plants of Different Types.” May 2010. 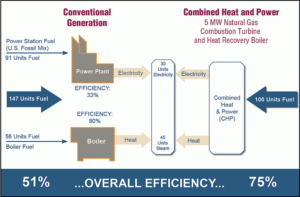 There are many reasons why industrial energy users should choose CHP systems over NGCC and other conventional fossil fuel systems. Due to high system efficiencies, CHP requires less fuel for the same energy output as NGCC units, saving money on fuel costs. While NGCC central power plants require long-distance transmission to provide electricity to end-users, resulting in transmission and distribution losses, CHP generates electricity and thermal energy close to where it is used, alleviating all transmission losses.

CHP systems can also function within a microgrid and provide reliable electricity and thermal energy during long-term grid outages, especially for critical infrastructure facilities, including hospitals and nursing homes and colleges and universities. There are also economic benefits to facilities that adopt CHP. These systems use less fuel and their on-site natural gas is usually cheaper than purchased electricity. On-site electricity generation allows facilities to reduce other electricity purchases. Adopting a CHP system also reduces exposure to electricity rate increases, protects revenue streams during disasters, and lowers the costs of replacing heating equipment.

In addition to the efficiency, reliability, and economic benefits of CHP compared to NGCC, the lower fuel requirements of CHP systems also result in fewer GHG emissions. Compared to conventional electricity generation, on average CHP systems use 32% less fuel and have 50% less annual carbon emissions. Less fuel use also reduces criteria pollutants and hazardous air pollutants. CHP systems have the potential to reduce emissions even further in the future by using renewable fuels such as biomass, biogas, renewable natural gas (RNG), and renewable hydrogen.

CHP system implementation presents an opportunity for cost savings and emission reductions in the industrial sector. This sector—including manufacturing, mining, construction, and agriculture—consumes close to one-third of all electricity generated in the U.S. Analysis conducted by the Combined Heat and Power Alliance (CHP Alliance) suggests that the U.S. could reduce annual carbon emissions by 174.5 million tons in 2030 if the industrial sector adopted an annual 1.5 percent energy savings target and commercial and industrial facilities installed a portion of the technical potential for new CHP. This is the same as taking nearly 38 million cars of the road. Additionally, this would save 396 million megawatt-hours (MWh) of electricity in 2030 and save businesses $298 billion cumulatively through 2030. In these scenarios, the greatest potential for emissions reductions are in states located in the Southeast and the Midwest (see figure below). 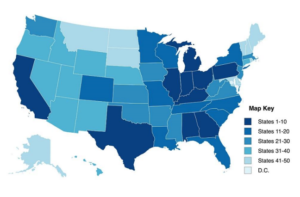 The high levels of energy efficiency that CHP systems can achieve by generating electric and thermal energy close to where it is used can help to save money and reduce all types of emissions, including greenhouse gases, criteria pollutants, and hazardous air pollutants. Even compared to the most-efficient NGCC systems, CHP is still more cost-effective, reliable, and environmentally friendly. To learn more about CHP and its role as a climate solution, join the CHP Alliance for our virtual summit, The Role of CHP in a Low-Carbon Future, on September 14-16.

This post is the second in a series focused on CHP’s effectiveness as a climate solution. The first post examined recent state legislation that recognizes CHP’s environmental benefits, and future posts regarding CHP’s role as the backbone of microgrids and CHP’s ability to work with renewable fuels will be released in the coming weeks.