A reliable source of electricity and thermal energy is crucial for critical infrastructure facilities to operate safely and continuously. Combined heat and power (CHP) systems produce reliable electric and thermal energy close to consumers, improving the resiliency of facilities that need it most. CHP systems can be deployed across critical infrastructure sectors, but can be particularly effective at colleges and universities.

Critical infrastructure is defined as the “assets, systems, and networks that, if incapacitated, would have a substantial negative impact on national security, economic security, or public health and safety.” Colleges and universities are important examples of critical infrastructure. In 2019, the National Center for Education Statistics reported that nearly 20 million students would attend colleges and universities that fall. These institutions not only provide educational services, but also house and feed students, host research laboratories and scientific projects, and are frequently significant employers in their communities. Institutions of higher education require reliable and affordable energy for their students, faculty, and staff alike.

While colleges and universities are deemed essential at any time, the current COVID-19 pandemic highlights the importance of these institutions in our nation’s socioeconomic fabric. As colleges and universities continue to determine whether or not they should allow students back on campus this fall, it is vital that these institutions are prepared and have access to reliable and affordable energy solutions.

Reliable power is essential for colleges and universities, but the growing threat of long-term grid outages can challenge their operations. Dangerous weather events are increasingly frequent across the U.S., wreaking havoc on communities and the economy. Last October, high wind gusts and extremely dry conditions in northern California led Pacific Gas & Electric Co. to cut power to nearly 750,000 customers across 34 counties to avoid sparking blazes from electrical equipment and reduce wildfire risks. In many cases, a single customer represents an entire building or complex, so it is estimated that around 2.5 million people lost electricity during this severe weather. This long-term outage forced a handful of colleges and universities to cancel classes, and also endangered many research laboratories and projects at The University of California, Berkeley.

CHP generation systems are a reliable energy resource for colleges and universities during grid outages. When the electric grid fails due to weather or an emergency, colleges and universities could experience costly damages to vulnerable research laboratories and jeopardize the well-being and education of their students. During a grid outage, CHP systems can function in “island mode,” automatically separating a college or university from the grid and providing it with consistent power and thermal energy. CHP systems can also be set up as part of a microgrid, serving a campus with multiple buildings, or even other facilities in the surrounding community. Functioning with a CHP system allows higher education facilities to continue regular campus operations when the rest of the grid is without power. CHP generation systems are also more cost-effective and efficient than conventional back-up systems.

As of 2018, 278 colleges and universities in the U.S. had installed CHP generation systems, totaling 2,560 MW of energy capacity. According to the U.S. Department of Energy, there is an additional 13,932 MW of technical potential in higher education institutions across the country, showing that there are many opportunities for future CHP implementation. Including CHP in infrastructure planning can help colleges and universities reduce energy costs, improve resiliency, increase reliability, and reduce greenhouse gas (GHG) and other emissions.

There are already examples of CHP systems successfully providing resilience and reliability at colleges and universities during grid outages and emergencies. One noteworthy example is New York University’s (NYU) CHP system that provided reliable power during Superstorm Sandy, as discussed a previous blog post. During the same storm event, the College of New Jersey’s 5.2 MW CHP system allowed the campus to disconnect from the grid and continue campus operations for a week. In addition, the College helped the greater community when the state’s largest utility used the College’s CHP equipment to reestablish grid service after the outage. Annually, this system’s efficiency saves the college $3.5 million and avoids emitting 3,800 tons of carbon dioxide.

Aerial Image of NYU with Power During Superstorm Sandy 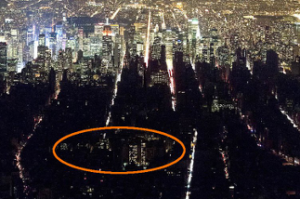 Louisiana State University (LSU) provides another example of successful CHP implementation. The campus has two CHP systems totaling 23.7 MW, which meet the majority of the university’s electricity, thermal, and peak load demands throughout the year. During Hurricane Katrina in 2005, LSU kept campus operations online throughout the entire storm and allowed administrative offices for the University of New Orleans and LSU Medical School to relocate onto its main campus. Additionally, LSU was able to house many of its displaced employees.

These examples of CHP providing reliable and affordable electricity and thermal energy in higher education facilities demonstrate this technology’s effectiveness in creating resilience for critical infrastructure during catastrophic weather or emergency events. Moreover, CHP systems provide benefits to campus communities during times of normal operation as well, due to their cost-effectiveness, efficiency, and ability to reduce emissions.

This post is the third in a three-part series about CHP and critical infrastructure. To learn more, read the first post on CHP and jobs, and the second on CHP at hospitals and nursing homes. Check back soon for our next series on CHP’s effectiveness as a climate solution.