Reliable electricity and thermal energy are essential for many types of critical infrastructure facilities to operate safely. Combined heat and power (CHP) systems produce reliable electric and thermal energy close to where it is consumed, improving the resiliency of facilities that utilize it. CHP systems can be deployed across sectors but can be particularly effective at critical infrastructure facilities, including hospitals and nursing homes.

Critical infrastructure is defined as the “assets, systems, and networks that, if incapacitated, would have a substantial negative impact on national security, economic security, or public health and safety.” Hospitals and nursing homes are important examples of critical infrastructure—these healthcare facilities accommodate over 1 billion patient visits each year and are expected to provide safe, consistent, and efficient care to all who walk through their doors.

Reliable power is essential for hospitals and nursing homes to safely serve patients, but growing threats of long-term grid outages challenge this mission. Dangerous weather events are increasingly frequent across the U.S. and wreak havoc on communities and the economy. In April, at least 30 people were killed and approximately 750,000 customers were left without power across the South and Mid-Atlantic after a series of violent storms and tornadoes. Last October, Pacific Gas & Electric Co. cut power to 730,000 California customers across 34 counties to reduce wildfire risks. While some had their power restored within 24 hours, nearly 600,000 customers waited multiple days before their electricity came back online.

While we know that resilient medical facilities are essential at any time, the current COVID-19 pandemic highlights the importance of emergency preparedness in hospitals and nursing homes. In order to continuously provide lifesaving services, these facilities require reliable and affordable energy resources.

CHP generation systems are a reliable energy resource for hospitals and nursing homes during grid outages. When the electric grid fails during natural or manmade disasters, hospitals and nursing homes could experience costly damages to delicate machinery and jeopardize the well-being of their patients. During a grid outage, CHP systems can function in “island mode,” automatically separating a healthcare facility from the grid and providing it with consistent power and thermal energy. CHP systems can also be set up as part of a microgrid, serving a hospital campus made up of multiple buildings, or serving a healthcare facility and other buildings in its surrounding community. Functioning with a CHP system allows healthcare facilities to continue regular operations when the rest of the grid is without power. CHP generation systems are also more cost-effective and efficient than conventional back-up systems (see diagram below). 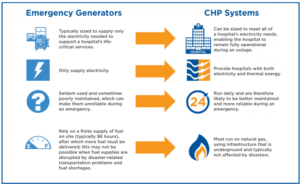 Over 200 hospitals and more than 175 nursing homes in the U.S. installed CHP systems as of 2018, equating to 752 MW of capacity. However, the U.S. Department of Energy finds that there is still 8,889 MW of CHP technical potential at hospitals and nursing homes across the U.S., illustrating the opportunity for future CHP deployment.

There are numerous examples of successful system resilience and reliability at hospitals and nursing homes with CHP systems during grid outages and emergency events. One prominent example is at the Montefiore Medical Center (MMC) in New York City, New York. In 1993, it became the first hospital in New York City to install a CHP system and had a 9.5 MW system capacity by 2001. This system provided MMC with continuous electricity service during the Northeast Blackout of 2003 and was the only hospital in the city to remain completely operational during the weather event. In 2012, Hurricane Sandy wiped out electricity throughout New York City, but MMC was again able to maintain regular operations and also accommodated patients from other hospitals that lost electricity. Not only did this CHP system provide resilience and reliable energy to the hospital, but it has also saved over $2 million annually and reduced emissions by almost 18,000 tons each year.

In Houston, the Texas Medical Center—the largest medical center in the world—uses a 48 megawatt (MW) CHP system that supplies 100 percent of their electricity needs. During Hurricane Harvey, the Medical Center was able to continue providing life-saving services because CHP sustained its air conditioning, refrigeration, heating, sterilization, laundry, and hot water needs throughout the storm.

These examples of CHP providing reliable and affordable electricity and thermal energy in healthcare facilities demonstrate these systems’ effectiveness in creating resilience for critical infrastructure during catastrophic weather or emergency events. They also illustrate CHP’s cost-effectiveness, efficiency, and ability to reduce emissions.

The Combined Heat and Power Alliance (CHP Alliance) has released a factsheet series on the implementation of CHP across different forms of critical infrastructure and the potential benefits of investing in generation systems. Additionally, the CHP Alliance is planning a webinar that will bring together a panel of CHP experts to discuss the technology’s future impact in critical infrastructure. Additional details on the webinar will be available in the coming weeks.

This post is the second in a three-part series about CHP and critical infrastructure. Read the first post in the series and check back soon for our posts about colleges and universities.