By Bradford Weir, intern, in collaboration with Jennifer Kefer, Vice President of David Gardiner and Associates and Executive Director of the Alliance for Industrial Efficiency

The presidents of over 300 US colleges and universities (along with governors, mayors, and CEOs) have reaffirmed their commitment to the Paris Climate Agreement following President Trump’s decision to withdraw the United States. Under the agreement, the United States had pledged to reduce emissions 26-28% below 2005 levels. While there is no uniform national approach for the parties that have indicated their commitment to the US contribution, one way that colleges and universities can reduce emissions while saving money on their utility bills is through combined heat and power (CHP).

By generating both heat and electricity from a single fuel source, CHP dramatically increases overall fuel efficiency – allowing utilities and host schools to effectively “get more with less.” CHP more than doubles the fuel efficiency of a conventional plant by using more than 70 percent of fuel inputs to generate electricity. As a consequence, CHP can produce heat and electricity while lowering costs and emissions for colleges and universities.

A DOE report identified colleges and universities as having significant potential for CHP capacity.

“Similar to hospitals, colleges and universities have coincident power and thermal loads that are often optimal for CHP systems,” the report says. “The typical college or university campus has a high thermal load for conditioning dormitories, classrooms and research labs. These systems are often served by central utility plants with chilled water and steam or hot water distribution systems.”

Because CHP systems operate independently of the grid, they increase the reliability of our power sector by ensuring that universities and university hospitals can “keep the lights on” during extreme weather events that compromise the electric grid. During Hurricane Sandy, Fairfield University, Princeton, and NYU all maintained basic power—lighting, heating, and cooling—for dormitories and university buildings. Massachusetts Institute of Technology, who recently announced a decision to upgrade their CHP facility at the central utility plant, cites increased campus resiliency amid increasing frequency of severe weather events as a primary reason. 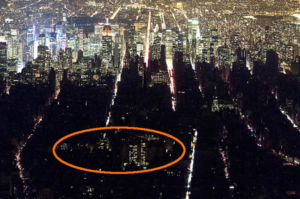 During Superstorm Sandy – the most destructive storm of 2012 – NYU’s CHP microgrid system kept the lights on and the hot water running (the circled region in the photo to the left). The microgrid was able to run independently of the standard grid; allowing it to serve as an island of light and power in lower Manhattan.

On top of increasing reliability, CHP also reduces campus emissions. CHP systems require less fuel than traditional generation to produce the same amount of energy. Because less fuel is combusted, GHG emissions such as CO2, as well as other air pollutants such as NOx and SO2, are reduced. A 5 MW natural gas-fired CHP system produces half of the CO2 emissions than a system with the same energy output from conventional sources. CHP is an attractive option to campuses with commitments to sustainability or emissions reduction goals, with many colleges and universities receiving EPA’s Energy Star CHP Award in the past.

To date, there are 2,635 MW of CHP installations at 263 campuses. The average college or university CHP system is about 10MW. The majority of these systems are fueled by natural gas and use boiler/steam turbines, combustion turbines, or reciprocating engines as prime movers. Figure 1 – a chart denoting which states have the most university CHP capacity – shows Wisconsin leads the way in CHP capacity at colleges and universities with 449 MW, nearly doubling the capacity of the next best state California (262 MW).

The technical potential for CHP at colleges and universities, however, is significantly larger than the current capacity. In most state cases, Colleges/Universities are 2nd behind Commercial Buildings/Offices as “Top Commercial Type with On-Site CHP Potential.” DOE identified 12,846 MW of CHP potential—the generation equivalent of more than two-dozen conventional power plants—at 5,596 sites. This is nearly five times the current installed capacity, representing significant opportunity for emissions reductions and cost savings.

CHP can benefit any college or university—no matter the size or location.

Take the University of North Carolina at Chapel Hill, for example. UNC’s current CHP system has been in operation since 1992. With a 28 MW capacity, the system can produce one-third of the required electricity for a campus with nearly 30,000 students—not including the hospital. UNC’s system is more than 70% efficient, uses 13% less fuel than traditional electricity and thermal power generation, and reduces campus carbon emissions by 230,000 metric tons per year.

Williams College and Bowdoin College, both small, liberal arts schools in New England, have installed CHP systems on their campuses. Bowdoin’s system provides heating and hot water for 1.4 million square feet across 56 campus buildings, while the Williams system performs the same function for nearly 90% of campus. Both Bowdoin and Williams rely on CHP for space heating and hot water—no small feat for schools that endure long, cold New England winters.

Second Nature, a nonprofit network for higher education and organizer of the American College & University Presidents’ Climate Commitment (ACUPCC), identifies nearly 600 colleges and universities with active commitments in climate, carbon reductions, or resilience. CHP systems can help these schools achieve their goals by increasing efficiency and reducing emissions—all while saving them money on their utility bills.