Industrial, commercial, and municipal energy users are looking for cost-effective technologies to reduce their greenhouse gas emissions. Combined heat and power (CHP) systems can help in this endeavor due to their high efficiency: systems typically reach efficiencies between 65-85 percent, with some approaching 90 percent. Including CHP in infrastructure planning can help facilities improve resiliency and increase reliability, while also reducing energy costs and greenhouse gas (GHG) and other emissions.

In addition, CHP systems can reduce emissions even further if they are powered by renewable fuels such as biogas, including renewable natural gas (RNG), or biomass. Though many of these renewable thermal technologies are in nascent stages of development, CHP will be the most efficient way to use them because CHP systems require less fuel inputs for the same energy output when compared to other generation units.

Renewable thermal technologies can serve as the primary fuel source for CHP systems and further reduce emissions across the industrial, commercial, and municipal sectors. Some CHP facilities already use biomass fuel, which includes forest and crop residues, wood waste, or food-processing residue. Similarly, biogas—gas that is captured from manure, wastewater treatment, or landfills—is used in a variety of sectors. Renewable natural gas (RNG), or biomethane, is processed biogas that has been cleaned and conditioned to become fully interchangeable with conventional natural gas and can be used in natural gas infrastructure.

In the future, CHP systems could run on hydrogen. This fuel is usually produced through a thermal process known as natural gas reforming, or electrolysis using domestic resources like nuclear power, biomass, solar, and wind. Using electricity from wind turbines and solar panels to power the electrolysis process and produce hydrogen is still under development, but has seen increased interest.

There are already examples of facilities across economic sectors that adopted cleaner and renewable fuel sources for their CHP systems. The University of Missouri (UM) in Columbia, MO uses biomass to fuel part of their 66-megawatt (MW) CHP district energy system. Servicing approximately 30,000 students and 275 buildings including a hospital, research laboratories, academic buildings, residential halls, and dining facilities, the CHP system can meet the campus’s needs for electric power and thermal loads. In 2013, the plant replaced a coal-fired boiler with a biomass boiler that consumes more than 120,000 tons of sustainably sourced biomass from the local economy. This transition to renewable fuel reduced UM’s coal consumption 93 percent and reduced overall greenhouse gas emissions by 54 percent from 2008.

The Camden County Municipal Utilities Authority (CCMUA), a wastewater treatment plant in New Jersey, treats nearly 58 million gallons of sewage per day and has a 3.5 MW CHP facility. Its “Sludge Digestion” facility reduces the sludge generated by 50 percent and uses it to produce biogas to fuel the CHP unit. This closed loop system (see diagram below) provides at least 50 percent of the wastewater treatment plant’s energy requirements, reduces the plant’s overall greenhouse gas emissions, and shrinks the required landfill space for sludge disposal. 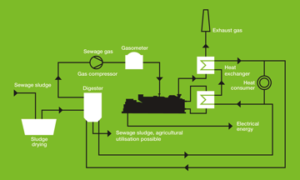 Facilities across the country are producing RNG by removing the non-methane components of biogas. The Clover Hill Dairy in Campbellsport, Wisconsin uses anaerobic digesters to generate biogas. A recent upgrade removes the non-methane components of the biogas so the methane can be used as a fuel or energy source. The project improves access to RNG for transportation and thermal energy, but also benefits the local community by capturing 99 percent of the methane made during RNG production contributing to cleaner air, less noise pollution, and less odor. 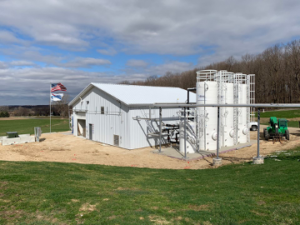 Though hydrogen fuel is still in early stages of development, many companies have plans to adopt hydrogen energy in the future. For example, the historically coal-fired Intermountain Power Plant in Delta, Utah recently signed a deal with Mitsubishi Hitachi Power Systems for two natural-gas fired turbines that will run on a mixture of 30 percent hydrogen and 70 percent natural gas by 2025, and increase to 100 percent hydrogen by 2045. This 840 MW facility provides electricity to municipalities across Utah and California, including Los Angeles. This project will also store hydrogen which can provide power when intermittent renewable resources are limited and provide seasonal energy storage from renewable energy sources when supply exceeds demand.

Outside of the U.S., there are plans to develop a green hydrogen-driven CHP system in Dubai. The hydrogen will be produced from an electrolysis plant powered by solar photovoltaic (PV) capacity that is currently being expanded to reach 800 MW by the middle of 2020. This example of CHP producing electricity from hydrogen will not only save up to 40 percent of primary energy and emit 60 percent less carbon dioxide and nitrogen oxide, but also demonstrate hydrogen’s potential for use in the transportation and industrial sectors.

To learn more about CHP and its role as a climate solution, join the CHP Alliance for our virtual summit, The Role of CHP in a Low-Carbon Future, on September 14-16.

This is the final post in a series focused on CHP’s effectiveness as a climate solution, to learn more, read our previous posts about state legislation recognizing environmental attributes, comparing CHP and central gas plants, and CHP and microgrids.