Combined Heat and Power (CHP) has existed for over 100 years, and it is a proven technology to reduce greenhouse gas (GHG) emissions, improve energy efficiency, and provide resiliency. CHP systems have historically been powered by traditional fossil fuels, but there is a growing interest in “CHP 2.0,” CHP that uses low-carbon or renewable fuels, such as hydrogen, biogas, and renewable natural gas (RNG). CHP systems running on low-carbon or renewable fuels can cut emissions even further. While challenges remain with the transportation, distribution, and storage of hydrogen, biogas and RNG are commercial fuels that can be implemented immediately.

Biogas is gas captured and created through digestion (AD), using organic waste sources such as municipal solid waste, manure, wastewater sludge, or crop residues. In AD, bacteria break down the waste into a biogas composed of methane, carbon dioxide, and small quantities of other gases. Biogas can be captured and used in a CHP system on site, which reduces emissions and improves resiliency. The World Biogas Association predicts that AD could reduce GHG emissions by up to 4,360 Mt CO2 equivalents, through renewable energy generation and avoided emissions management.

RNG, also known as biomethane, is most commonly produced from biogas that has been cleaned by removing CO2 and other trace gases. RNG can also be generated from the direct gasification or pyrolysis of biomass. The high methane content of RNG allows for full compatibility within natural gas appliances and pipeline systems. CHP fleets that run on natural gas require minimal upgrades to be fueled by RNG, and would produce immediate emission reductions by transitioning. According to an ICF study, RNG deployment could achieve as much as 235 MMT of GHG emissions reductions by 2040. This is equivalent to 95% of the average GHG emissions attributable to natural gas consumption in the residential sector from 2009-2018.

Bigas and RNG are viable low-carbon fuel alternatives, yet their deployment has been relatively lacking. The United States currently has over 2,200 sites producing biogas with 860 of these locations using the biogas they produce. However, the American Biogas Council estimates there are 13,500 sites with biogas production potential, primarily at animal farms and wastewater treatment facilities. The majority of biogas deployment to-date has been through landfill gas collection, which comprises nearly 90% of total production. The livestock industry is responsible for one-third of total methane emissions in the U.S., and represents a significant untapped market for biogas production.

Current number of operational and potential biogas sites in the U.S. by feedstock 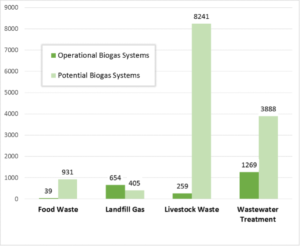 CHP fleets have already begun taking advantage of biogas and RNG technologies. In Santa Barbara, California, the Tajiguas Landfill utilizes two CHP units that are fueled by on-site landfill gas. These systems have a high capacity factor due to the constant production of landfill gas, and they avoid additional emissions that would occur from flaring the landfill gas or using natural gas. The Tajiguas Landfill CHP systems provide resiliency in the case of unplanned power outages, and save the site roughly $1 million per year on electricity costs.

Facilities across the country are also refining biogas into RNG to produce a methane-rich fuel. The Clover Hill Dairy in Campbellsport, Wisconsin recently upgraded their anaerobic digestor system to allow for the production of RNG. This will allow for reductions in transportation-related emissions as well as the end-user’s carbon footprint. The new system captures 99% of the methane generated during RNG production and improves the transportation and thermal energy sectors’ access to RNG.

Utilizing biogas and RNG as alternative fuels in CHP systems has the potential to prevent significant GHG emissions. CHP systems are highly efficient, generating electricity and heat together and eliminating the need for two separate fuel sources. If CHP deployment were increased by 25%, this would reduce annual CO2 emissions by over 24 million tons and save over 100 million MWh in annual electricity use. Utilizing CHP 2.0 systems has the potential to cut emissions even further.

Utilizing biogas and RNG can also provides resiliency and economic advantages. Biogas is often produced and consumed on the same site, which reduces reliance on the larger electric grid in the case of unexpected outages. CHP systems fueled by biogas or RNG can be connected to a microgrid, reliably powering several buildings or facilities and improving resiliency to more frequent and severe natural disasters. In addition, RNG can be put into the existing gas pipeline infrastructure, which can be a low-cost option for transporting the fuels. Similarly, given RNG’s compatibility with natural gas, CHP systems utilizing RNG would require few upgrading costs.

Biogas and RNG are technologically feasible, commercially available, and have large untapped potential. Immediately taking advantage of biogas and RNG resources and using them efficiently in CHP units can help to reduce emissions and improve resiliency.

Learn more about CHP as a climate change solution by reading our report, CHP and a Changing Climate: Reducing Emissions and Improving Resilience.

Learn more about biogas, RNG, and CHP by reading our blog posts CHP and renewable fuels and the day 3 wrap-up of the 2020 National Summit on CHP.

Stay updated about future CHP Alliance events by clicking here to be added to our mailing list.