This post is the second in a three-part series on the CHP Alliance’s Virtual Summit.

Earlier this month, the CHP Alliance hosted its 2020 Virtual Summit: The Role of CHP in a Low-Carbon Future. The goal of the Summit was to bring together experts from across the CHP industry and beyond to talk about CHP and how it can help to reduce emissions, improve electric reliability and community resiliency, and save money. Attendees heard from over 50 speakers over the course of three days during panels, keynote addresses, and breakout sessions. Learn more about the event and our first day by reading our day 1 wrap-up.

On the second day of the Summit, we started with a keynote address from Bob Perciasepe, the President of the Center for Climate and Energy Solutions (C2ES), an independent environmental nonprofit that advances strong policy and action to reduce greenhouse gas emissions, promote clean energy, and strengthen resilience to climate impacts. Similar to Senator King on the first day of the Summit, Bob observed that no single thing will solve the climate problem. Bob noted that CHP can achieve near-term reductions and set us up to be even more efficient in the future, and commented that the United States needs to develop a national sequence of how we will achieve carbon reductions over time, and that we have to commit to these developments.

The first panel of the day focused on Decarbonization of the Commercial and Industrial Sectors. The industrial sector in particular is frequently cited as one of the most difficult to decarbonize. CHP has always played a role in the decarbonization of the industrial sector and is increasingly being applied in the commercial sector. We learned about the findings of a recent ICF study completed for the Energy Solutions Center (ESC) looking at grid impacts of CHP, both now and into the future. The analysis showed that CHP can play a strong role in decarbonization efforts across much of the U.S., while also providing resilience benefits. We also learned about carbon capture and storage (CCS) technology, and its commercial and industrial applications. Finally, we heard from an industrial end-user of CHP, Cargill, and about how CHP has been part of their strategy to reduce their GHG emissions.

Our next group of panelists discussed federal policy. We heard about the CHP provisions in the Solving the Climate Crisis report from the Democratic members of the House Select Committee on the Climate Crisis. Recommendations regarding CHP include extending investment tax credits for CHP, expanding DOE programs to deploy industrial efficiency technologies, including the CHP Technical Assistance Partnerships (TAPs), and expanding deployment of distributed energy resources by providing incentives and assistance and eliminating barriers. Similar to the first panel of the day, the resiliency benefits of CHP were highlighted as a way to help us adapt and make the country more resilient. We also heard that innovation and advanced technology, as well as resiliency and adaptation, are important to Republican members of Congress. CHP fits into each of these categories as there continue to be new technology developments in CHP, and CHP systems provide resiliency and reliability benefits. It was also highlighted that there are a lot of places where there is consensus between Democrats and Republicans on CHP.

The last panel of the day considered Innovative Low-Carbon CHP Projects, with a focus on hydrogen as fuel for CHP systems. CHP systems are highly efficient and are able to help reduce greenhouse gas (GHG) emissions. Though still in early stages of development and deployment, CHP systems can run on hydrogen fuel, reducing their emissions even further. We heard about the potential for hydrogen’s decarbonization impact for industry, including some of the current inhibitors to large-scale investment in hydrogen, such as asset utilization, the role of the seaborn market, and centralized versus distributed production. In addition, we heard from an electric and gas utility about the challenge of decarbonizing what has historically been a fossil fuel heavy industry, and how they are looking at a variety of solutions, including the injection of hydrogen. Specific technologies that can be used with hydrogen fuel were also discussed, as well as the technical feasibility of using hydrogen within pipelines and individual systems. 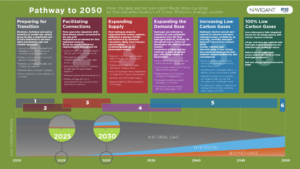 At the end of the day, we heard from Congressman David McKinley (R-WV) about his perspectives on CHP. Congressman McKinley emphasized practical solutions and efficiency for the country’s energy future, noting that CHP projects are projected to save money on utility bills. Echoing a theme from day 1 of the Summit, the Congressman noted that not enough people understand how we can apply energy efficiency to improve people’s lives and save money, and there needs to be a focus on education. Congressman McKinley also noted that bipartisan agreement on energy efficiency is achievable, as well as the need for further research.

We had another great day of the Summit! In addition to the plenary sessions, attendees also had opportunities to network with their fellow attendees and meet members of the CHP Alliance’s Executive Committee. We looked forward to hearing from our final groups of speakers on the last day of the Summit!

Read our summary about day 1 of the Summit, and check back here to see our wrap-up about day 3 of the event! In addition, throughout the fall months, we will have a CHP Summit Insights series, where guest authors will share key takeaways from many of the Summit’s panels and keynote addresses.

Want to learn more about these topics? Read our previous blog posts on CHP and state policy, and CHP and renewable fuels, as well as our factsheet and brief on CHP and infrastructure planning.